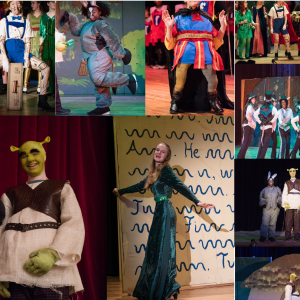 Shrek the Musical South Orange Middle School put on quite a play! Shrek The Musical was a very hands on produc-tion that required a lot of dedication from both cast and crew. Tech week was full of late nights and hard work, but in the end it was worth it. The play was more than […] 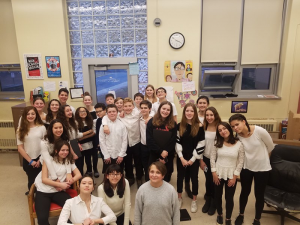 On Sunday, February 11th, members of the 8th grade chorus performed with the South Orange Symphony. Choir members performed two patriotic songs with the orchestra, as well as Home on the Range as a solo piece. This experience rounded out the SOMS music experience. In 6th and 7th grade, choir members are able to see […] 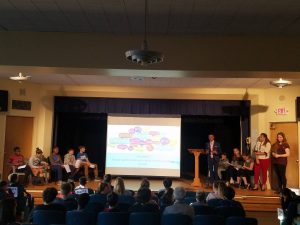 The This I Believe “Coffee House” was an event hosted by the 7th grade English Language Arts teachers. This symposium allowed students to share their personal narratives, experiences, and beliefs with their peers. The idea came from the 1950s radio broadcast series by NPR. org, which featured acclaimed journalist, Edward R. Murrow. McCarthyism, the Cold War, and racial […] 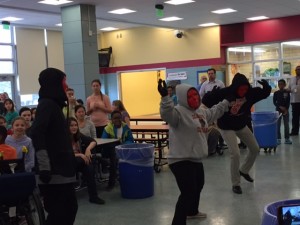 Our SOMS teachers’ tremendous talent was on display for our students to see at the January 15th “Teachers Got Talent” Lunchapalooza. Mr. Cicenia, Mr. Feldman, Mr. Cook, Mr. Ezzo, Mr. Tighe, and Ms. McGlotten and friends played music, sang songs and even danced for the cheering kids. And all of this fun and talent was […] 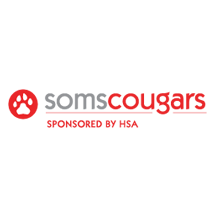 The South Orange Middle School HSA has debuted a brand new website, just in time for the approaching school year. The SOMS Cougars site, which can be found at somshsa.org, features events and important dates, information about the school and individual grades, links to the school and district calendars, news about each grade, extra curricular […] 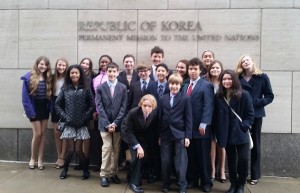 Ever think it might be possible to change the world?  How about spend a weekend tackling some of the world’s most challenging problems?  This past weekend, 19 SOMS students got to do exactly that.  These students, along with SOMS teachers Katerina Karis and Barbara Tsioni, joined 1600 other students and teachers from around the world […]

For the past 45 years, the Sterling Fund at the South Orange Middle School has awarded scholarships to students to attend the Cape Cod Sea Camps — also known as Camps Monomoy and Wono — in Brewster, Massachusetts. This scholarship fund was created in 1968 by Raymond and Lois Sterling, the Principal and Vice Principal […] 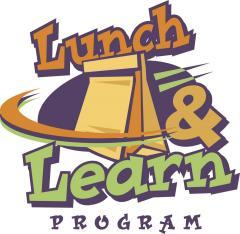 On Friday, February 20th, SOMS launched its second year of Lunch and Learn.  During our Lunch and Learn sessions, members of our parent community come in and speak to students about their field of work.  The goals of the program are to begin building career awareness during the middle school years with our students, and to involve […]

Read More
To Vaccinate or Not

The 7th grade science classes of Anthony Cicenia engaged in wonderful and spirited debates on Thursday (2/19) and Friday (2/20), as part of their unit on bacteria.  Specifically, students explored the question “Should ALL Americans be Vaccinated?”  The students were broken up into groups, researched information and arguments  on both sides of the issue, and then constructed […] 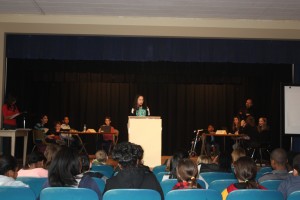 Should violent games be banned? Should cell phones be allowed in schools? And are sports worth the risk? These complex and provocative issues affecting our society were explored, researched, and debated by sixth graders in Ms. Alloway and Ms. Forero’s Language Arts classes. These formal debates were the culmination of an IB MYP unit of […] 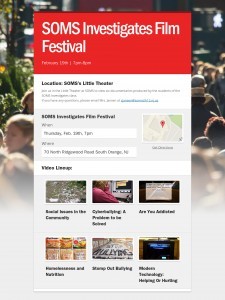 The first ever SOMS Investigates Film Festival was held on February 19th in the Little Theater at SOMS. The films being shown were documentaries that the students created in their SOMS Investigates class. In the class, 6th graders select a social issue related to the community, research it, and then create a documentary video about […]

Read More
Talent and Giving on Display at SOMS 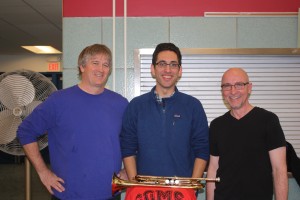 From impressions to an electric cello, SOMS teachers’ talents were on display on Feb. 6th at our latest Lunchapalooza.  Mr. Saverese, Mr. Feldman, Ms. Steiner, Mr. Keating, Mr. Cook, Mr. Tighe, and Mr. Ezzo shared their unique talents and sense of fun with 6th, 7th, and 8th grade students during their lunchtimes. But entertainment was […]

Two 6th grade students recently attended an evening at NJPAC with Neil deGrasse Tyson, astrophysicist and director of the Hayden Planetarium. His appearance was a combination of lecture and an engaging question and answer session with the audience. Ms. Miller asked the two students to write a reflection of their night with Mr. Tyson. Click […]

Before the holiday break, the 6th grade students from Team A participated in the  “Team 6A Food Drive Smackdown!”  They collected over 800 items to be donated to the Food Bank of NJ. The competition was between Team A’s third period classes. Each class secretly came up with strategies to beat the other classes. Mr. […] 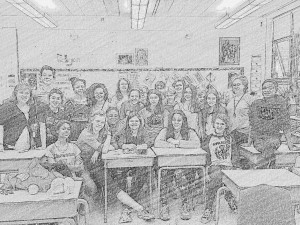 Ms. Karis, Ms. Tsioni, and all of the students who participate in the SOMS’ Model U.N. Club deserve a huge shout out for their amazing fund-raising efforts.  Throughout the month of October, the Club raised $1037 to help children throughout the World through UNICEF.  The students sold baked goods and pizza, distributed UNICEF boxes, and […]

Who needs an Oscar when you can win a Bammy! A Bammy is an award presented to the best educators in the United States. Out of hundreds of nominees from across the country, only 25 were chosen in 2014. Only three educators were selected from New Jersey. On Sept. 27th, the Academy of Education Arts […] 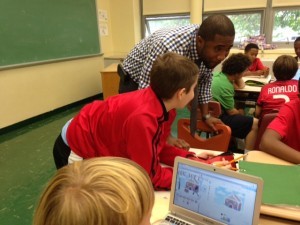 Coding is in full blast at SOMS this year. For the first time, coding is offered as an elective at SOMS, allowing 7th & 8th graders to design their own original media project. A mere month into the elective, a variety of animated characters, from girls and boys to bears and cats, are catching balls, […] 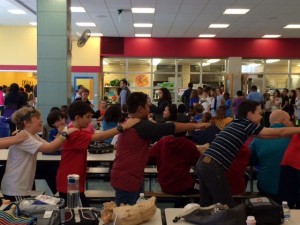 Dancing, trivia and altruism went hand in hand at the HSA sponsored Lunchapalooza event on October 3rd. SOMS 6th, 7th and 8th graders helped fight hunger in our area by donating to the NJ Foodbank during their lunch period, while at the same time playing Hot Lunch Jam trivia and dancing the conga. Lunchapalooza was again a […]

Read More
SOMS In The News! 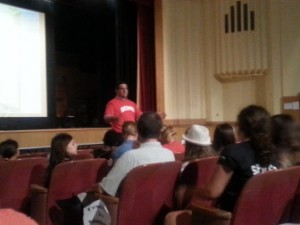 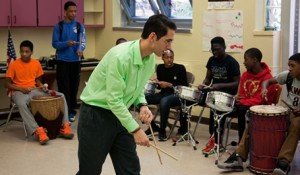 Click HERE for weekly eblast sign up   You hear them first — the rhythmic pulsing of more than a dozen drums. And you can’t help but feel the energy.  But it’s not until you walk through the door and see the concentration on each student’s face that you truly appreciate the gift Jake Ezzo […] 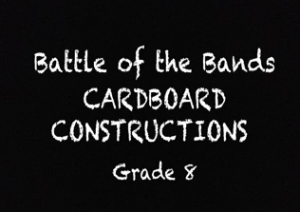 Inspired by the collage works of artists Pablo Picasso and Romare Bearden, 8th grade students up-cycled and repurposed cardboard destined for the recycle bin at SOMS. They constructed musicians that were challenging and innovative. Each student received a Grammy for their creation. The cardboard was free, the exploration, risk taking and construction was priceless. 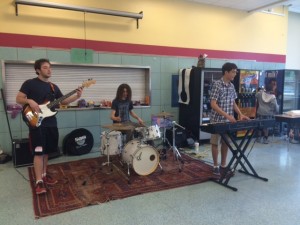 Lunchapalooza welcomes back The Collectives! Former SOMS grads Jack Goldberg, Sam Gomberg, and Zach Heinz played awesome jazz music for our students during all 3 lunch periods on Friday, May 30th.  Lunchapalooza is brought to you by the HSA!  See you next year with more great lunch tine events! 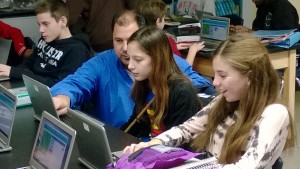 SOMS students participated in the Hour of Code (http://csedweek.org) initiative during science class during the week of December 9th -13th.  The goal of this global initiative is to provide all students with one hour of basic computer coding and to raise awareness of  the need for computer science courses in schools.  On Tuesday, December 10th, […] 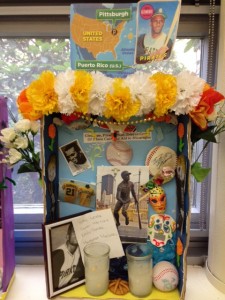 Mr. Ezzo’s drum circle, Vitamin D (the D stands for drum), specializes in West African/Brazilian music utilizing a system of music education from Brazil known as O Passo (the step).  O Passo is based on the natural gait all of us use – walking.  It mimics a conducting pattern, and the participants embody the rhythm […]

With so many incredible things happening in our children’s classrooms each day, we thought it would be good to give the fly on the wall view point. Recently, Ms. Karis’ 8th grade Social Studies students were tasked with combining knowledge gained in class with document analysis, to respond to open-ended questions in a “carousel quiz” […]

Ms. Pew’s 6th grade social studies students put their knowledge of the Industrial Age to the test in a Meet the Press style question and answer session. Teams of 3-4 students were provided with a historical figure that they had to research and prepare questions for. Each student in the team chose a role to […]

Last Friday’s after school social was a tremendous hit – more than 200 6th graders turned out to represent the Class of 2016.   They danced, shot hoops and enjoyed an endless bounty of delicious treats. Teams of children scoured the halls for clues in a massive scavenger hunt that incorporated the IB principles.  Cooperation and […] 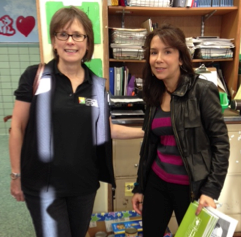 Congratulations to 6th grade Science teacher, Ms. Diane Grant, and SOMS Art teacher, Ms. Lisa MacPherson for being selected to participate in the Stevens Institute of Technology STEAM: Integrating Art into STEM through Engineering Design program. Both teachers attended training at Stevens this summer and will be collaborating in offering a STEAM: Engineering and Design […] 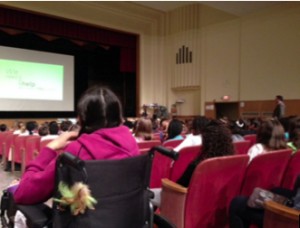 SOMS sixth grade students are on a mission to collect 1,000 lbs of food by Nov. 22.  Under the leadership of Mrs. Forero, along with Laura Sodano of the Community Food Bank of NJ http://www.cfbnj.org This statewide initiative will help feed over 400,000 students in NJ who rely on the local food banks every day.  […] 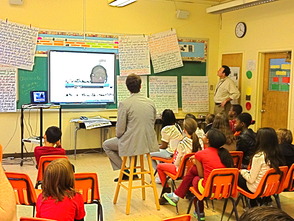 SOUTH ORANGE, NJ – Sixth-grade students at South Orange Middle School participated in a structured debate on Monday via the internet with students in Jersey City, Quakertown, Pennsylvania, and Lansdale, Pennsylvania, on the topic of the value of homework. Read More

Read More
SOMS Students Read the Writing on the Wall 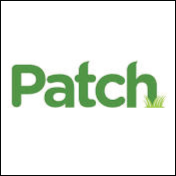 The new Wall of Higher Learning in the South Orange Middle School cafeteria was created as a way to showcase the colleges and universities SOMS students have attended upon graduation from high school. The art on the Wall was painted by former SOMS student, Connor Davenport  (a Columbia High School senior who will be attending […]

Stay up to date with
SOMS events and news!

Sign up to receive the
weekly email blast below.

Shop online, support
SOMS! Use the links below
to shop online at
Amazon.com or Target.com,
and a percentage of your
purchase is donated to
SOMS HSA